Hobbies Include: Reading to Mystery Animals in the Dark

Anyway, I’m getting off track. Listen. I am in a full-on panic. Like, I just looked at my keyboard to see if there was a button to record. Video. Of myself. Freaking out. That is so far from something I would EVER do, let alone today, when I’m post-3-days-sick and look it, and also losing my shit so completely that I’ve even wondered if I’m tripping. (I’m not.)

*another, because omg, y’all*

Fuck. Okay. So. As mentioned above, I’ve been feeling pretty shitty for a few days. Maybe I’ll get into that later. (I really should, I know you guys are just dying to know. *laughs and then cries and then remembers I have a point here*)

I’ve been waking up pretty early, around 4 in the morning, and it’s still really dark here at 4 a.m. because normal people are asleep in their beds at that ungodly hour, and not outside discovering all the reasons they should be INSIDE FOR THE REST OF FOREVER.

No, seriously, I didn’t decide that until just now. And it’s 12:30 in the afternoon.

My first visitor was adorable:

I even slowly walked towards her to get better pictures. The video is really shaky, because I was excited/prepared to run and also my body just does whatever the fuck it wants to now, whether I’m into it or not. (I’m not.)

The next morning it was earlier, and much darker, so I was on the deck sitting in the (presumably) safe glow of the motion light when the fox literally walked right the fuck up to me on my damned deck.

She and I noticed each other at the same time and had about the same reaction, except after I turned and ran I came back.

This morning, just as I opened the door, I spotted 8 or so Mystery Animals trundling across the driveway and into the woods. One was an adult, I think, followed by a bunch of little rolling-walking babies. I couldn’t see them clearly (which should be obvious following that description) but I could tell they walked funny. Maybe really fat racoons? I don’t know.

After all that, I decided I was being too quiet out there. The reek of sick human and cigarette smoke wasn’t working as a wild-animal-repellent.

So that’s why I read the news out loud this morning. And that’s why I was totally shocked when I looked up and saw that the baby deer and his mom, who are pretty much always somewhere around, were Right There, so close they could’ve eaten my flowers had they not already done that.

Throw in the bobcat my son and I saw a couple weeks ago, and I was starting to feel like an R-rated Disney princess. Of course, there’s no way Mother Nature was gonna let that shit stand.

I was almost finished catching all my new friends up on the news, when Something Very Rude made a scary huffy-growly sound and, I mean, it was a heartbreaking article about Lithuania, but don’t bite the messenger and all that. Story hour ended very quickly, and I did not go back outside until daylight.

And here we are. I’m feeling a bit better since my complete and total freak out above.

After all these recent encounters with wildlife went smoothly, I should’ve known shit was about to go down. But I did not. I was even singing and wearing headphones outside. It’s like I have a subconscious desire to be maimed or at least very worried by something sneaky.

This is how it happened: We have an above-ground pool, and I have to stand on my tip-toes to see over the side and into the water. Which is what I was doing when I saw a mutant creature from outer space swimming in my pool.

You have to understand, I hired people to literally dig out part of my yard so I could have the pool placed in that very spot. It gets sun most of the day, so it’s always warm-ish. With all my various conditions, I can’t hack cold water for more than like 2 seconds. I have enjoyed the shit out of that pool. Even though we’ve had problems getting the chemical levels just right, because we are pool-care virgins, I’ve been in and out of it multiple times a day.

I also have 9 Highly Suspicious Bug Bites. A normal person would probably have gone to the doctor, but I didn’t because ticks have already royally fucked me and I already have All the Things.

It did not occur to me that anything in my pool had the ability to bite me. I mean, what the fuck? Even though I put the damn thing kind of near a hickory tree that may or may not be purposely thwarting my leaf-removal efforts, the pool is still cleaner than the river, right?!

Just making sure I had the correct fingers raised. (I did.)

I was not attacked then, and I laid right there, in the river, just like that, for the majority of our “float trip.” But a swimming pool full of chlorine and all sorts of other chemicals I can’t figure out and don’t really want to? Why wouldn’t there be a prehistoric, should-be-fucking-extinct-ass-bug in there swimming laps?

UPDATE: This morning I inspected the pool from a safe distance and there wasn’t a single living creature in it. So, I’m pretty glad that I didn’t set it on fire like I wanted to yesterday. Also, Google and my husband both assured me that Ed (the dangerous dinosaur bug) was not responsible for my bites.

Husband: Don’t go outside, there’s a big copperhead on the porch.

Him: No wonder the house is such a mess.

Him: That’s a broom.

So there was this giant snake on our porch, and by giant I mean a normal-sized snake, but it was venomous and it crept right up behind the husband. We are a little freaked out, especially since we don’t know where it is now.

Then this morning some shit happened and I ended up having to walk down the dirt road to get home, about a mile or so, and somehow I ended up with a pen in my hand. No idea. 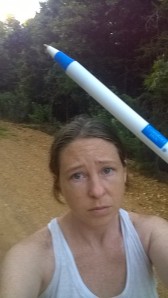 But I was a lot nervous about the snake and of course bears and coyotes and stuff so I was glad I had the pen. Because I’d just write them a polite note and ask them not to kill me, please. Or give them an autograph right in the eyeball. I don’t know. But it made me feel a bit better.

Now I’m home safe and sound and I’ve got the doors locked so the snake can’t get in. Because we all know how well that works.