People of Walmart Fight Back

Today has been overly eventful. I feel like a fretful child who has just come from a birthday party (with clowns) where she ate too much cake and is now crying because she is tired and sticky and has to bathe.

Except I didn’t go to a party, I’m not a child, and I’m not planning on bathing.

My day started with a two hour drive to see an allergist who actually knows her ass from a hole in the ground. It was refreshing. The actual allergy testing, not so much.

Believe it or not, I actually have a normal-sized arm. Pictures can be deceiving.

I was early for my appointment because I underestimated how awesome I am at directions, so I ended up with some free time to explore the town. I deduced that the citizens of this place would be fancier and in better shape than my unkempt self, basing this solely on the ungodly amount of gyms and hair, nail, and tanning salons.

This would later prove to be an utterly false assumption.

I’m sure you’ve all seen People of Walmart. If not, you better go take a peek. I’ll wait. 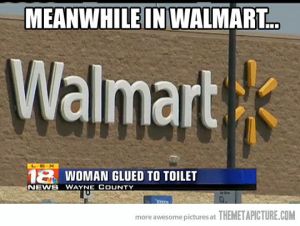 And you thought I was weird.

Anyway, I was super tired by the time I got to the store. I gathered up my few purchases after searching all over that motherfucker for mothballs just like I do every single time (they are by the ironing boards, just like always), and went to the checkout.

I chose Express Checkout 20 Items or Less based on the cashier. Not too old, not too young. The old ones are slow and follow every single rule. I don’t have time for that price check bullshit. I’ll give you a dollar for it. The really young ones are the same way. What you want is a checker who has been there long enough that the brainwashing has worn off, or one who just loves people so much that they will do anything in their power to make your shopping experience end well.

There was a group of three shoppers in front of me; Dad in an electric cart, and a grown man and woman who in my mind became brother and sister, but in reality I have no idea.  Anyway. I knew we were all fucked when my perfect cashier up and left. The young man who replaced her was one of those guys who you know just loved telling people, “I’m sorry. It’s store policy.” while staring at you blankly even though you have a binder and obviously know how to fucking coupon, dude!

The lady in front of me didn’t like it either. He was screwing up her coupons, the line was getting all long and shit, and her face was getting red and blotchy.  Next thing, Checker-Guy walks off with a coupon, presumably to verify something, but I think he was just gassy.

At this point, my legs were killing me. My cart happened to be next to the empty checkout which, had it held another cashier, could have saved us all some grief, Walmart. So I took a seat on the bagging carousel and opened my Coke. The cashier finally returned and never said a word about the delay. Let me remind you that we were in the Express Lane. He finally gets all the lady’s coupons in and…she thinks he messed up. She requires a printout and then verifies each and every coupon, I assume for each of her 20 items BECAUSE THE SIGN CLEARLY SAID 20 ITEMS OR LESS. She was obviously very flustered and I felt for her, I really did. It wasn’t her fault she was trying to save money and her dad is disabled and her brother wears funny pants. Goddamn it, life.

She goes to pay (finally) and drops her debit card. Of course, since this is a fucking comedy of errors, it falls between the motorized cart and the counter. She can’t reach it and Dad seems oblivious, or maybe he just wasn’t moving fast enough for her. Next thing I know, she grabs the basket of the motorized cart with both hands and shoves it backwards, Dad and all, directly into my shopping cart, which slams into me, knocking me off my perch in the bagging area and into the wall of the checkout behind me. All this happened so fast, I didn’t even have time to curse. It was like a row of dominoes, and I was the last one.

Or get your ass kicked; either way.

Doesn’t-Give-A-Shit-Cashier didn’t even look at me. Violent Coupon Lady paid for her stuff and stomped away.  Silly-Pants Brother laughed at me (I laughed back) and asked if I was okay, and Dad In the Cart said “Whoa. This thing has reverse?”

I was over my limit on interacting with people before I even went in the store.  Then I got assaulted. With a shopping cart. Today I have been poked, scratched, told my nose is crooked and has a crease in it and that I have dark circles under my eyes, was covered in itch dots, had blood drawn, talked to 11 strangers, and been knocked ass over teakettle in a grocery store. 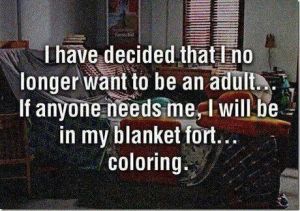 I like words. I suspect I would like sanity, but I really have no way of knowing. I can be reasonable, but not often. END_OF_DOCUMENT_TOKEN_TO_BE_REPLACED
This entry was posted on Wednesday, May 7th, 2014 at 8:17 pm and tagged with allergies, coupons, express lane, people of walmart, shenanigans, shopping, Wal-Mart, walmart and posted in Just Being Awesome, random bullshit, total chaos, your health is your wealth and this is why I'm poor. You can follow any responses to this entry through the RSS 2.0 feed.
« Because Good Decisions Are My Specialty
Wild Things and Some Animals Too. »

78 responses to “People of Walmart Fight Back”