The Tooth Fairy and Santa are Two Different Burglars

My 6-year-old has approximately 15 loose teeth that she refuses to pull out. She’s my third child, so…whatever. I have more important things to worry about, like whether I should use markers or colored pencils when I’m creating masterpieces in the coloring book I stole from her.

Perhaps I should’ve paid more attention to the tiny fucker. (The tooth, not my kid.)

It was a simple trip to get ice cream. Thing 3 took two bites and declared that it was “too hard” and “was making her tooth fall out.” ICE CREAM? Ice cream is too hard? Seriously?

So I had to eat not only my own ice cream, but hers as well. Because I’m not about wasting money.

This is how it all started.

After that, we went to the store and like every other damn time we’re in public, she started regaling strangers with our life story. As usual, I held my breath and prayed that she wouldn’t burst into song, since she apparently thinks her life is a Disney film and my boobs are a good subject to sing about.

She started talking about her tooth so I said, “You should just pull it out so Santa Claus will come tonight.” I recovered gracefully, as always, and shouted, “NO! SHIT! I MEAN THE TOOTH FAIRY! The tooth fairy will come. Not Santa.”

Jesus. The little hustler took advantage of my confusion and added a chocolate bar to our cart.

I organized my bags just so, unaware that my cart and my sweaty butt crack were blocking an entire parking space.

I was ready to get the fuck home.

The candy bar was a gooey, melted mess by this time. Because I am a genius, I handed it to her, telling her that if she HAD to have chocolate, she’d just have to lick the wrapper. I know. I know, okay?

I’d just pulled out into traffic when I heard, “My toof!” I glanced back and decided that I wasn’t cut out to be a mom.

The tiny maniac, grinning and covered in blood, chocolate, and tears, proudly handed me her tooth. I put it in my purse, handed her napkins to bite down on, and took the liquefied chocolate from her gross little hands. Thanks to my unparalleled grocery placement skills, I knew right where the wipes were, so we were able to clean ourselves up a little.

I breathed a sigh of relief. We survived all that, while I was navigating through heavy traffic, and I handled it like a pro. Don’t tell me I’m not mother of the fucking year. Ha!

The mental high fives came to a screeching halt when we came up to an intersection with a flashing yellow arrow. We were in the middle of a left turn when flashing turned to not flashing and cars started coming at us from every direction.

What. The. Fuck. WHAT’S WITH THE YELLOW ANYWAY? In my day, yellow meant slow down. This was bullshit. Just then, my daughter stood up, leaned towards the rearview mirror, and said, “I’m going to look at myself. I can do that because you never buckled me in.” ARE YOU FUCKING KIDDING ME?

With complete control over myself and the situation, I yelled, “FUCK!” Then, “Sit down. Oh my god. Sit down.” We made it out of that godforsaken intersection and I pulled over.

Seatbelts on, I was pulling carefully back onto the road when my husband called. I thought I would tell him what we had just been through, and he would laugh and not be appalled that I even had a driver’s license.

Just as I answered the phone, the forgotten bloody chocolate disaster slid off the dash and into my lap. “SONOFA…Here. Talk to your daughter.”

Somehow we made it home in one piece, WITH the tooth, and I’m never leaving this house again.

Can you explain this yellow flashing light bullshit? What’s the grossest mess you’ve had to deal with while driving? Can my kids come stay with you for the summer?

I feel like I should write about the holidays, but I don’t really want to.  So I’m going to half-ass it, and tell you a few things that happened, and then move on to the important stuff, like sleeping and chickens.

1.  I may have inadvertently caused my ferret to have a nervous breakdown.  Ferrets sleep 18 or more hours a day.  I thought my ferret loved red things, because he’s always stealing anything red and hiding it.  So I got him a red toy for Christmas and hung it in his cage.

He didn’t sleep for 24 hours until he killed it.  Could not rest until the evil red intruder was destroyed.  When I finally noticed what was happening, he was hissing and twitching like a ferret on crack.  (Or how I would imagine that.  My ferret does not do crack, so I don’t really know.)

Similar to this, only more crazy eyes.

2.  I drank all my wine on Christmas Eve, which caused me to accidently insult my cousin.

Her:  You liked me when I was a kid.  (Meaning, you liked me, as opposed to my brothers.)

When he went up to the register they said, “I’m sorry sir, we don’t sell alcohol on Jesus’ birthday.”  Oops.  My bad.  (Sorry, Jesus and embarrassed husband.) 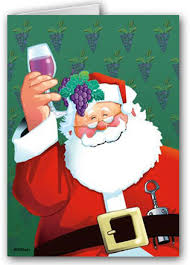 No, Santa, not today.

3.  Cracker Barrel poisoned me somehow and I had an allergic reaction in Wal-Mart, which made me really confused, and I told my daughter to either get the microwave or don’t, we gotta go.  She’s 4.  There was no microwave.  I’m pretty sure they thought I had found more wine.

4.  I ate half a pound cake for breakfast one morning.  As I was on the last bite my daughter wanted some, and in what was not one of my finer moments, I told her it had butter in it.  Because she hates butter, and I didn’t want to share.  That was not a lie, because  I am 95% percent sure pound cake has butter in it.  Mom-Of-The-Fucking-Year.  That’s me. 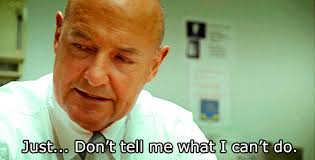 I Should Probably Come With A Warning Label.

This is our first Christmas with a cat.  I was expecting some Christmas tree shenanigans, but was pleasantly surprised at Leeloo’s great restraint.

Then I wrapped her present and put it under the tree.  Her catnip-stuffed present.

I woke up to her circling the tree in a wild-eyed frenzy, batting at ornaments haphazardly, but with no apparent joy.  We adopted Leeloo, so who really knows what sort of shit she was into on the streets.  I’m not judging.  But I’ve seen junkies who didn’t look as desperate as this cat.

You may find it hard to believe, but this is not the first time my Christmas spirit has gotten in the way of good sense.

There was the year when I decided to give my mom hermit crabs and a plant as a gift.  Both of which I bought weeks before Christmas, wrapped, and put under the tree.  You’re welcome, Mom.  Please enjoy these dead things.

I swear, it never even occurred to me that they would die without food or water.  Or oxygen.

Then there was the  Christmas that I fortified myself with antianxiety medication before the family gathering.  It went well.  So well that afterwards I told my little brother, “Wow!  I love those guys.  Everyone was so cool tonight, I probably didn’t even need that Xanax.”

One Christmas when I was a moody teenager (and had yet to be prescribed the calm-the-eff-downs) I got furious with my dad and, in the heat of the moment, decided his Christmas present was going for a swim.  It was a toolbox.  Quite a chore getting it out of the pool once I calmed down.  That’s actually maybe the most effort I’ve ever put into a gift, if you count drying it out and all.  Anytime, Dad, anytime.

There was the Christmas that I made bath products for my extended family and some friends.  They smelled wonderful and were so pretty.  It was sad that I didn’t think to test them out until it was too late.  It was also embarrassing to have to call people and say, “Oh, about the gift, it’s just decorative, okay?  DO NOT LET IT TOUCH YOUR SKIN.”

I’m not even going to go into the Christmas when Santa brought the kids a trampoline.  Yes, I made my husband and my dad put together a 16 foot trampoline in the dark, in the cold, in the snow, on Christmas Eve.  And they did it, because they love me.  Or because I’m scary.  Whatever.

This Christmas I’m going to try use my head for something other than testing to see if the pancake griddle is hot.  Because that freaking hurts.