5 Things You Don’t Want to Hear at Work

I was working the admissions desk at an emergency room when this guy came in, literally moaning. He made the above statement and then proceeded to scream and yell incoherently until a doctor came running. It was my job to get the patient’s information before they were seen, but all I could get from this guy was, “Oh oh OHHHHH God” and “Oh Sweet JESUS HELP ME” and “OHHHHHH, MY LORD!” Right up until he got a shot of the good stuff, then he hopped up out of the bed and took off running.

2. “The reason you can’t breathe is cause that cop just maced the lady down the hall.”

At that same hospital, one night a patient became rather unruly. By happy coincidence there happened to be a police officer present at the time. We were all unhappy, though, when he decided to mace her right there in an enclosed space. We were all choking and coughing and cursing the rest of the night, unruly patient included.

3. “There’s a guy bleeding out in the parking lot.”

Oddly enough, this was NOT at the hospital. I was in the back office of a convenience store working on the schedule when one of the employees informed me that a truck had pulled up right in front of the doors and the driver was bleeding. I ran out, grabbing a dish towel on my way, and yelling at the clerk to call 911. I can only attribute my next actions to adrenaline or shock, because I really can’t see myself behaving the way I behaved without freaking out or at least throwing up. But I climbed up in the truck with the old, smelly, drunk, bleeding man and pressed the towel against his abdomen, where he informed me he had shot himself. The worst part about the whole ordeal was that every time he passed out, he would wake up irate and insisting that he needed to pee. I’m still not sure if he came to the gas station for help or to use the facilities.

At the same store I found drugs two different times. When I questioned the employees, of course they denied it, but only one of them lost their shit when I went to flush their stash. (Ha-ha, lost their shit. See what I did there?)

This, unfortunately, was said to me after I tripped over a frozen turkey and fractured my elbow. I know. Who does that?

What’s the craziest thing you’ve ever heard at work?

That Time I Accidentally Picked Up a Hooker

This was a few years ago, and I’ve mentioned before that my memory is nonexistent, but this is one story I will never forget.

It was around 2005 and my brother lived in a shitty part of a medium-size college town.  I lived (and still do) 50 miles from the nearest bar.  So I visited my brother frequently.  That is to say, I would crash at his place after a night of dancing and/or other bad decisions. 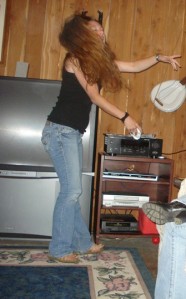 Even I’m not sure what was going on here.

One morning, after what I must assume was a night of excess, I stopped at the convenience store right up the road.  I don’t remember what I had been doing the night before, but I do know I was still wearing the same clothes and I was out of cigarettes.

As I was pulling out of the parking lot, I must’ve rolled the window down for a smoke.  I remember hearing a shrill voice yelling unintelligible word-sounds.  It didn’t occur to me that I was being yelled at–I just looked out of curiosity, I guess.

What I saw coming towards me was vaguely alarming, but either I was still drunk or just slow, because instead of driving off I just sat there and smoked and waited for this loud stranger to reach my car.  I listened to her through the open window.  I don’t remember what she said or why I let her in my car.  I must have felt some sort of kinship with a woman, stranded, after a wild night…I don’t even know.  I do know that I wasn’t scared before she got in the car.  That’s when everything changed.  My stranded, helpless woman turned into something remarkably similar to this: 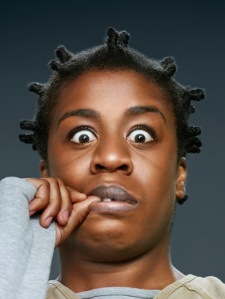 I wasn’t even out of the parking lot before she started ranting.  Turns out, her p friend had brought her to this street and left her the night before, but the gentleman she was supposed to visit with told her he didn’t like her because she talked too much and her hair was ugly. (Nothing like picture above.)  So he didn’t pay her.  Her friend wouldn’t come get her, she didn’t have any money or drugs, and she was about to stab somebody.

By then I had kind of realized that a stabby hooker in my car was not an ideal situation.

That’s when she started getting really agitated.  She was wearing a sweatshirt with a pocket on the front and had her hands in the pocket.  I was driving, but she kept getting right in my face, leaning across the console to make her point.  She was so wound up that there was spit flying from her mouth, and she kept getting closer and louder and I just knew something painful was about to happen.  I didn’t know what the hell she was doing with her hands, but it was making me exceedingly nervous.  I was all the way up against my door trying to get some space, all while driving this woman who won’t stop yelling long enough to give me directions.

I distracted her with a cigarette and pulled over in a parking lot.  We’d gone about two miles.  I had no idea what to do with her; I just wanted to get her out of my car before she stabbed me.  But she wouldn’t stop screeching and she wouldn’t get out.  She was literally bouncing in the seat, but at least she didn’t have her hands in her pocket anymore.

I think this was about the time when she came down to earth enough to realize that this silly bitch in the driver’s seat was scared shitless.

I ended up cringing as far away as I could get while she told me her name (Pearl), where she was from (Texas), what she was going to do to the guy who left her last night (not pretty), and finally, that she just needed a liiiiiittle bit of money to get her by.  Whatever I had would be good.  Oh, I only had $10?  Well, how about that pack of cigarettes too then?  Yeah?  Okay, lemme write down your number, cause I’m gonna call you when I can pay you back.

The ONLY good decision I made that morning was not giving this woman my phone number.

I almost forgot! (Okay, I did forget.) Do YOU have any crazy hooker stories?  I can’t be the only one!

Conversation regarding blogging, drug use, and the importance of a good alias.

By Steph
Initially I had decided not to tell my husband I was starting a blog.  But since we have an open relationship (not that kind of open, ohmygod) I decided I had to.  Also, since I’m going to be talking (shit) about him frequently I guess it’s only fair.
Gus:  A blog?  Cool.
Me:  Yeah, I thought I should tell you because some things are going to change around here.   I’m not going to have time for a lot of things.  Like cleaning the house and my real job.
Gus:  We’ll hire someone.  (He’s so supportive.)
Me:  Also, I may have to start doing drugs.  You know, so my life is more interesting.
Gus:  You’re not going to use my name are you?
Me:  Yeah. But not your whole name.   Did you hear me say I’m going to have to get a habit?  For work.
Gus:  I want you to refer to me as Gus.
Me:  No, you are not a Gus.  Come up with something better.   Now, about the drugs.
Gus:  No.  Call me Gus. You can even explain that I’m not really a Gus.
Me:  No.
Gus:   Then I don’t want to be in it.
Me:  Too bad.
Gus:  I’m killing you off in my book.

Leave a comment   |  tags: alias, blogging, cleaning, drugs, exciting, housekeeper, say my name | posted in Blogging, random bullshit, your health is your wealth and this is why I'm poor