You know how your brain tries to protect you from things you can’t handle? I think mine has been doing that without my knowledge or consent.

I’ve spent the last month dusting my living room. This may not seem like a remarkable feat, but here:

If I made a list of all the household chores that I despise (that would be all of them) dusting would be Number One.

Now, granted, I spent some of that time sick. Migraines, arms not working, back breaking in two (not really). But seriously. I had real shit to do. Shit that actually NEEDED to be done. Like get my kids ready for school, since it STARTS TODAY.

No big deal, right? Right. Except my oldest is going to college, middle is starting 8th grade, and littlest is entering 2nd grade.

So one would think, since a) I’m freaking the fuck out and b) I love school supplies more than almost anything, that I would be prepared. Backpacks. Notebooks. Lovely, lovely pens. Highlighters.  Folders. Every year since the oldest started school, I have had these things for weeks before school started. Backpacks would be packed with carefully labeled supplies. All binders would have little pencil pouches, just in case they forgot to bring a pencil to class. Paper would be stocked inside each folder, and folders would all be a different color so they would be easy to identify in a hurry.

Ha. This year, I didn’t buy shit. I mean absolutely nothing until yesterday. The day before school. So I assume my stupid asshole of a brain purposely derailed me. Likely because I CAN’T STAND THE THOUGHT OF MY OLDEST LEAVING.

Yesterday we finally went shopping. The boys didn’t give a shit about folders or non-scratchy pens, so they went out to the car. I filled my cart with my favorite things, plus bedding and other dorm shit (sob).

I was getting more and more stressed out the longer I was in the store. The last things I needed were red pens and lunchboxes. THEY WERE COMPLETELY OUT OF RED PENS. This was almost enough to push me over the edge, but I held it together and went to find lunchboxes. Of which the entire fucking store only had two.

I couldn’t take anymore. I stood there, lunchbox in each hand, waving them in the air and cursing like a sailor. An employee saw me and I had to explain (while starting to cry) that I wasn’t cussing at him, I was cussing at life. And lunchboxes. He left, looking a little scared, and I sank to the floor. The lack of choices in lunchboxes was apparently all I could take. I sat there in the middle of the store, just sobbing, with two lunchboxes clutched to my chest.

After finally getting my shit together enough to stand up and get the hell out of there, the checkout guy asked me, “How I was doing.” ARE YOU FUCKING KIDDING ME? MY HEART IS BREAKING AND SCHOOL STARTS TOMORROW AND YOU ARE OUT OF RED PENS!

We got home and I sat down in the floor, surrounded by school supplies. This is my happy place. I do realize that my middle child is in 8th grade. I didn’t give a shit. I started filling binders and writing class names on the spines and making sure each one had a pouch of pencils and pens. This lasted approximately 3 minutes before he came out of his room and asked for his supply list and all his stuff.

Sure. YOU’LL REGRET THIS WHEN YOU DON’T HAVE COLOR-CODED BINDERS, EACH WITH THE CORRECT RATIO OF PENS TO PENCILS! I’m positive he didn’t sharpen all the pencils. You have no idea how much this hurts.

This morning we took the two youngest to their schools, then I went off with a fully loaded car and child who was not coming home with me. I maintained while we drove (except I got really lost). I was fine as we unloaded. Once again my breakdown happened at Walmart. I may not be allowed back there. This is what I found when I returned to the dorm, loaded with shampoo and soap and condoms. (YES, condoms. Shut up.) 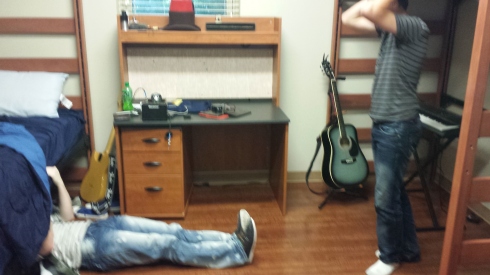 These kids look like they’ve totally got it together enough to survive on their own. Also, the condoms were possibly a waste of money.

I finally left my baby (yes, the one who is a foot taller than I am). When I got to the parking garage, my car was lost. There were so many levels, I was so tired, I was crying again, my feet were on FIRE…I seriously considered just laying down and rolling until someone ran me over. Then they’d be obligated to give me a ride to my car. Wherever it was.

Do you think I subconsciously blocked out The Big Day? And the directions? Also where I left the car? I’m pretty sure I just pretended none of this was happening until it actually happened. Surely one of you has had a crying fit over lunchboxes? Scared a Walmart employee? I can’t be the ONLY one who has seriously considered rolling down the ramps in a parking garage. Right?

I like words. I suspect I would like sanity, but I really have no way of knowing. I can be reasonable, but not often. END_OF_DOCUMENT_TOKEN_TO_BE_REPLACED
This entry was posted on Thursday, August 18th, 2016 at 7:58 am and tagged with college, condoms, crazy, kids, love, parenting, school supplies and posted in Just Being Awesome, parenting, school, small humans, total chaos. You can follow any responses to this entry through the RSS 2.0 feed.
« I’m back and I’m…just like before.
Sewing, like life, is hard. »

25 responses to “Red Pens and Condoms.”