Wild Things and Some Animals Too.

A couple of weeks ago I agreed to go with the Pre-K on their field trip to a drive-thru safari.

Anyway.  Parents weren’t allowed on the bus (thank god), so I had to drive myself.  Since it was about a two-hour trip, I told the teacher I’d have to stop and stretch a few times.  Luckily for me, it turned out to be a big craft fair weekend, so my stretches took place at little yard sales along the way.

After that, I got lost once and had to wait for a train twice, so I ended up missing the bus tour of the drive-thru part of the safari.  I made it just in time for lunch and walking around what basically amounted to a huge farm with one bathroom and about 500 kids under 5 years old.

The kids had an absolute blast, the animals seemed used to all the fuss, and I learned a few valuable lessons.

1.  If a monkey has a pacifier in its mouth, there is probably a good reason for it.  We thought this little guy was so cute…until he started pulling on his monkey penis right in front of all the little kids.  Try explaining that to a 5-year-0ld girl.  I think I said something like, “What the — oh, look, a giraffe!”

2.  Giraffes have the longest, prettiest eyelashes I have ever seen.  Also, they seem very dainty for something 20 feet tall. 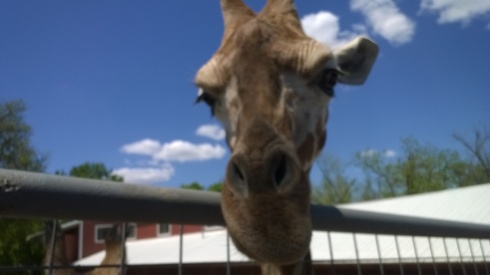 Also, I think she’s British. We were feeding her lettuce, but I feel like she really wanted a cup o’ tea.

3.  This tiny monkey is wearing a diaper (and I guess we all know why).  I think generally he gets to be held and petted, but much like the kangaroos, was not up for the horde of little people who descended that day.

A baby monkey, tearing your heart out with his tiny sad face.

*Note:  I’m beginning to wonder if there’s something wrong with me.  When we went to a different zoo-like place about a month ago, I asked my husband if he noticed that a particular ape-creature had gigantic balls.  He was horrified and claimed not to have “been looking.”  I don’t know how you could have missed them.  Also, have you seen a rhinoceros up close?  Jesus Christ.

4.  Goats can be very judgmental.  This goat is judging me right now.

What the fuck is wrong with you, lady, walking around looking at monkey privates?

All in all, it was a fun day, even if I did learn a bit too much about animal anatomy.