I’m not very good at anything that has to do with people.  As my son just pointed out yesterday, if you have to argue that you are not that awkward, then you probably are. 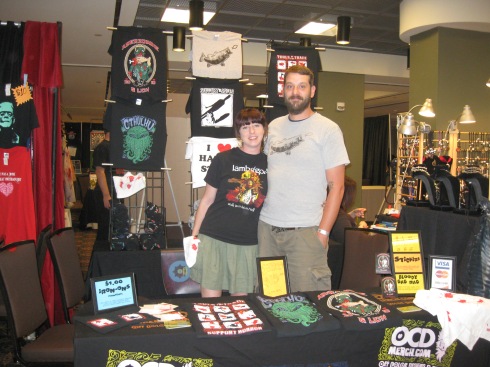 I was super excited because Norman Reedus and Michael Rooker were there.  DARYL AND MERLE DIXON, YOU GUYS!  And don’t even get me started on Boondock Saints, or I might not stop.

So anyway, we drove like six or eight hours to get there, and then set up and wandered around and worked some and I, of course, eyeballed the long line forming at Norman’s table.  The line where people were paying 30 bucks for a picture and an autograph.  My husband was not having any part of me paying money for a picture before we’d even made any money.  So I did the next best thing, made a new friend, and headed up to the room to drink.

I’d only been gone about  30 minutes when my brother-in-law called me.  “Norman Reedus wants a shirt.  Get your ass down here if you want to give it to him.”

Say whaaa?  From this point on, I mainly only spoke in squeaks.  It seems that Mr. Reedus saw one of the guys go by wearing an awesome shirt (see my adorable husband above.  That shirt.) and he asked for one.  And because the guys LOVE me, they let me deliver it.

Now, my husband was no doubt thinking how AWESOME it was that Norman liked his design, and how GREAT it would be to have his picture on our website with one of our shirts!

Does this really need a caption?

So I take the shirt to him, and he was very, very nice and gave me a lovely hug, and even held the shirt up to himself, presumably so I could take a picture.  This is the picture I got: 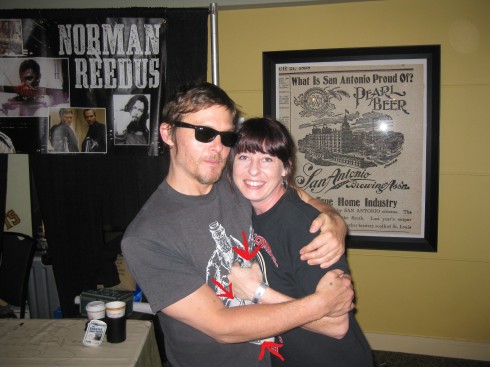 This is not exactly what my husband was looking for.

In my defense, the shirt is in the picture.  See it?  It’s right there, clenched in my fist.  I promise it’s there.  (If you ever see Norman Reedus wearing a shirt with two fish on it, I need a picture of that real, real bad.)

The fun didn’t end there.  Oh no, I was just getting started.  After babbling something incomprehensible about “the stupid fucking rope,”  I made my way back to our booth.

For some reason, my husband left me in charge; I don’t know, I guess because I had shown such stellar marketing skills thus far.  So there I sit, a little drunk, a lot happy, just watching the madness that is a horror convention, when who walks up to our booth but MERLE. 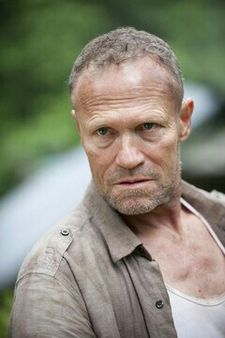 Much cleaner and less murdery in real life.

I shit you not.  I was kind of scared, but I couldn’t stop grinning like a damn fool, and he was grinning back, and I knew I should say something, but I swear I just squeaked.  Again.  Then I said, “Ummm…doyouwannasticker?”  He accepted it very graciously.  Do you remember that scene in dirty dancing where Baby says, “I carried a watermelon”?  It was just like that, only with a bloody zombie sticker.

So, anyway, my husband is totally going to put me in charge of promotions and customer service.  Because I am really not that awkward.

I like words. I suspect I would like sanity, but I really have no way of knowing. I can be reasonable, but not often. END_OF_DOCUMENT_TOKEN_TO_BE_REPLACED
This entry was posted on Wednesday, February 12th, 2014 at 2:51 pm and tagged with awkward squeals, Boondock Saints, Daryl Dixon, Merle Dixon, Michael Rooker, Norman Reedus, ocdlocal.com, t-shirts, Texas Frightmare Weekend, The Walking Dead, zombies and posted in random bullshit, total chaos. You can follow any responses to this entry through the RSS 2.0 feed.
« I’m Pretty Sure Pinterest Wants Me Dead.
Peeing Is Important. »